The church in Honningsvåg was consecrated in 1885 after a hurricane razed the old church in Kjelvik to the ground. The church is built in the neo Gothic style and has an important position in the population. Not least because of the burning of Finnmark in 1945. After the war the church was used as accommodation, bakery and kitchen, and today stands a symbol of hope, courage and unity - and as a tourist attraction in Honningsvåg.

The church in Honningsvåg was consecrated in 1885 after a hurricane razed the old church in Kjelvik to the ground. The church is built in the neo Gothic style and has an important position in the population. Not least because of the burning of Finnmark in 1945. After the war the church was used as accommodation, bakery and kitchen, and today stands a symbol of hope, courage and unity - and as a tourist attraction in Honningsvåg.

Throughout history there have been numerous churches in the area which makes up the present-day district of Nordkapp. In the olden days, people tended to live on the seaward side of the Magerøya Island since it was important to be as close as possible to the fishing areas. We know that in 1589 there were six churches on the island of Magerøya: one in Kirkesstappen just outside Gjesvær, and the others in Tunes, Opnan, Helnes, Lille Skarsvåg and Kjelvik. These churches were probably built during the Middle Ages and there is much evidence to suggest that the church at Kjelvik dates back to the late fifteenth century.

However, a number of the small fishing communities were abandoned during the seventeenth and eighteenth centuries and by around 1800 the islands only church was in Kjelvik. In 1882, Finnmark was hit by a terrible hurricane and the church in Kjelvik (consecrated in 1844) was razed to the ground. Afterwards it was decided that the new church would have to be built on a different site and there was a lengthy discussion as to whether the church should be built in Sarnes or in Honningsvåg.

In the end, Honningsvåg was chosen thanks to its central geographical position in the local authority and the fact that it had the best harbour. What is more, Karesius Løkke provided the land at Honningsvåg free of charge.

Once a decision had been made where to build the new church, there was naturally some discussion as to its design and size. The first suggestion, drawn up by architect JW Nordan, was a church with a long nave construction with seating for 210. The local authority council felt that this would be far too small and that the church should seat at least 400, since around 800 fishermen visited the area every summer. When the new church was finally built, it seated 255.

DG Evjen was the master builder responsible for the construction of the church. He had previously built several churches in Finnmark, including Talvik church in Alta. Honningsvåg church was consecrated on 22 October 1885 by the Reverend Mr Balke, rural dean of Karasjok. The church’s graveyard was consecrated in 1910 and subsequently expanded in 1930.

Honningsvåg church is built in a neo-Gothic style. The second half of the nineteenth century saw a good deal of church building in Norway and most of the churches from this period are neo-Gothic, based on the ideal of the old cathedrals. They were built with long naves, and had pointed arches and a retracted chancel. Most of the fittings were donated by the local Reading Association, whose benefactions included the altar reredos dating from 1913, painted by Conrad Valeur and depicting motifs from Mathew 14. The church also contains two crystal candlesticks which were presented to the church by HRH King Olav to mark the church’s centenary celebrations.

When the occupying German forces retreated from Finnmark in the autumn of 1944 they employed a "scorched earth" policy. In Honningsvåg every building except for the church and the morgue were burned to the ground. Most of the area’s inhabitants were evacuated to southern Norway, and when the first people returned in the summer of 1945 they were met by a depressing sight. However, the fact that the whitewashed church stood undamaged was enough to give the people renewed hope and courage. The first people to return moved into the church which came to be used as a place to sleep, a storage area and a kitchen. People slept everywhere: on the pews, around the altar, under the pulpit, in the gallery and up in the tower. A temporary kitchen and bakery were set up where food was prepared and bread baked for over 100 people every day. Gradually, barracks were constructed for people to live in and by Christmas 1945 the church was finally able to be used for what it was actually intended. Today, Honningsvåg church is the oldest building in the local authority and means a lot to the people of Nordkapp, not least because of the role it played in the summer of 1945.

After the war it was decided that a new church was to be built in Honningsvåg. The old church was small and ill-suited to pastoral functions other than church services. Several proposals were put forward. Architectural drawings were made for an extension to the old church and plans were drawn up for a modern new church building next to the existing church. However, the plans met great resistance from the local population, who did not want the old church to be tampered with. It was therefore decided that the church would continue to serve as the main parish church. Instead of a new church, a parish centre would be built to meet the parish’s requirements for offices and function rooms.

Today, Honningsvåg church is the main church in the parish of Nordkapp. The parish contains around 3100 residents. In 1999, 36 services were held and the average size of the congregation was 85. There were 32 christenings and 42 funerals were held in the church last year

Show all nearby accommodations 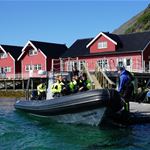 Distance: 6.8 km
'Ørntind' (or Eagle Peak in English) is one of 2 identical cabins located in our scenic fjord location in Sarnes. Perfect for family vacations, fishing trips or simply for a weekend getaway, this stunning location will not disappoint.
Book 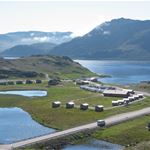